What is your earliest memory?

I guess it would be when I was about 3 or 4.    We lived in a tough neighborhood, but when you’re a kid, you don’t know the difference. You only know what you know. 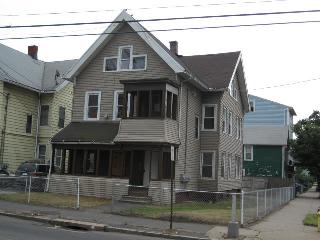 I used to visit my great-grandmother.  We lived downstairs from her in a 2 family house. Her name was Josephine, but to me, she was Nonnie. We would have tea parties.  Not the pretend kind.  Real tea cups, real tea.  I thought it was so fancy!  She even put the tea cups on matching saucers (ooh la la!).    She  would let me use all the sugar I wanted in mine.  She had tiny silver spoons especially made for sugar! I would drink with my pinky finger sticking out. We would sing a special song every time we had our tea parties.  “Tea for two! Two for tea! I love you! And you love me!”

She would let me dunk special “tea cookies” into my cup, and didn’t care if I made crumbs everywhere or if I spilled a little on her table.

She would make me Cheerios in milk with sliced bananas in the morning.  When she cut the banana up for me, her wide thumbs would bend really far back at the knuckle.  She called them “busy thumbs”.  I thought that was so cool.

She would hold my tiny hands in hers.  I can still remember the skin on her hands was so papery thin and soft.   She was so fancy in my eyes.  Nonnie would let me play beauty shop in her bathroom. She had all types of lotions.  I called them magic potions.  She’d let me put on her pink lipstick while I stood on my very own step stool in front of her mirror. Her bath tub even had high heels!

My favorite was when I’d run upstairs to her kitchen.  The smell would intoxicate me before I even set foot through the door.  Her pasta e fagioli (or as I call it pasta fazool) was my all time favorite!  She was the only one that I knew to this day that put celery in it, but I remember loving the crunch.  She would actually mash up some of the white cannellini beans with a spoon.  The broth was almost creamy.  All her food was so simple, but so delicious.

The best things in life are simple and uncomplicated whether it’s food, a relationship, or even a song.

What was your earliest memory?

What’s In A Name?

For those of you that don’t know me, I don’t have a middle name.  Growing up I was jealous of all of my cousins that had cool middle names like “Marie” or “Rose”.  I was just Mindy *Nothing* Mac.

Random person: Why don’t you have a middle name? That’s weird.

Random Person: O yeah?  Then what is it?

At the time, I thought I was the bee’s knees.

From that point on, Madonna was my middle name.  Until I started to get older.

One day at a family function when I was about 18, somebody reminded my whole family what my chosen middle name was.  My nickname was Madonna from that point on.  This served as a private family joke and an opportunity to embarrass yours truly in front of people that weren’t aware of my “name”.

When I was about 21, the glorious Madonna had morphed into Madge.  Apparently her at the time husband Guy Ritchie started calling her Madge.

Yes.  You guessed it.  My nickname was Madge.  It stuck.  Unless of course I’m feeling crazy, my friends call me Madge-alicioius.

So now, in public, when my friends outwardly call me Madge, I feel like this

Just a little glimpse into my world, ah the wonder of it all!

Do you have any funny nicknames?  How did you get stuck with them?

Since I am a big sentimental sap today, here’s a few baby pics of yours truly…

Here’s Rocco’s baby picture! That was a mini diet coke bottle! He was only 1 pound, 12 ounces!!

Paint it White! Who’s with me?

I saw this article on Color Me Happy. This has been a topic of debate at our casa. This is our kitchen before we bought it:

Me: Honey, imagine how great this kitchen will look when we paint the cabinets white and add some brushed nickel handles!
Him: White paint?! That will ruin the cabinets!!!

We did put on the nickel handles, and it does look so much better, but our house is the wooden wonderland! It would look so much more polished white. My persuasive skills need some major assistance.

I’m just happy that it’s not only us having this disagreement. Apparently it’s an epidemic! Check out the article, tell me what ya think.