Self Host Self Help? Not So Much.

In a fluttering, impulsive, (so very typically me) fashion, I decided (in a split second) to purchase my own blog domain and make the jump to a self- hosted website.

In the next week or so, I’ll be posting the link up to the new address.  I’m really excited to have more control over the blog’s layout, have access to more interesting bells & whistles, and other cool stuff.  I can’t wait to hear what you guys think!

I am very excited but I am struggling quite a bit, actually. If any readers know anything about using wordpress.org and want to help a sistah out, I would reeeeally appreciate it. Please e-mail me at FindingSilverLinings@gmail.com.

Speaking of changing things up, I dyed my brown hair black (thanks Tiffany for your input!), *iPhone pic, sorry guys*.

I cashed in a few gift cards at Home Goods and picked up a new comforter for our bed.  I’m not sure how I feel about it.  I love the pattern, I love my headboard.  I don’t know if they mesh well.

Rocco was digging it.

Please help this indecisive girl out!

I know Christmas isn’t about the gifts, but I scored some pretty sweet stuff this year!

Here are my top 10 gifts that I found under my tree!

9: Ugg moccasins. They look & feel like slippers, but have a rubber sole like “real shoes”.  Plus, they don’t get funky if you don’t wear socks. I haven’t taken them off!!!  I swear, I even accidentally wore them to the gym!

8: This hoodie from PINK by Victoria’s Secret.  Fab cozies are a must.

6: Eye cream and serum from Arbonne.  Smells fantastic, costs too much for me to  splurge on, makes my skin look & feel like a million bucks. 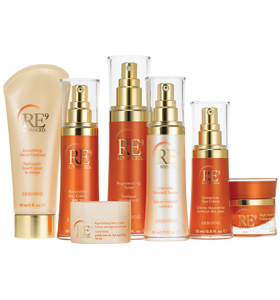 via A Case Of Beauty

5:  A lift ticket for Mount Killington

4: Milk Bar Cookbook!!  Be prepared for those fatkid posts!  (the creator of the Compost Cookie recipe wrote the book!)

3: Black-out curtain liners.  Weird gift? Yes. Not waking up at whatever time the sun does, wonderful.

2: A Kindle!!  I’m super excited about this one because I’ll be doing a ton of traveling in 2012, so this was a perfect gift for those long plane rides and my over-stuffed carry-on bag.

1: Slick new Rossignol bindings that match my skis that I got for my birthday!!

Rocco’s stocking was stuffed to the max!  He ripped his stuffed toys to shreds within 3 seconds of my giving them to him! But, he loved all of his treats and toys.

What were your favorite gifts?

So, this weekend is our annual ugly sweater party.  See last year’s highlight reel by clicking  here.  If you’re feeling lazy, here is a mini sampler of the fun. 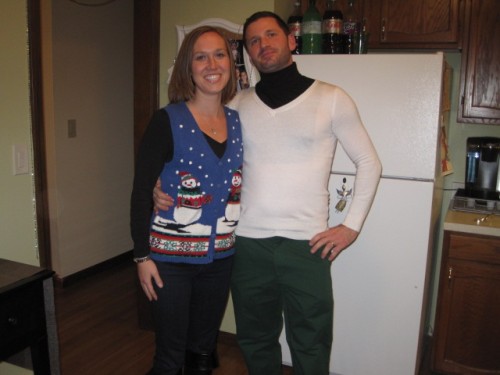 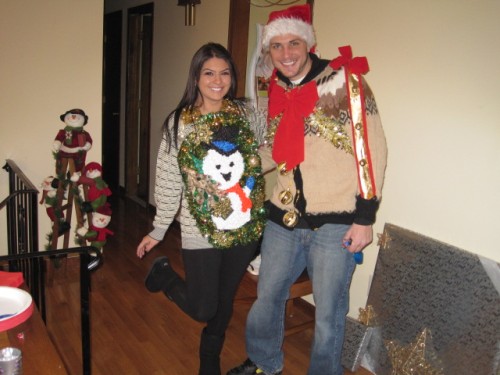 We usually have Rocco sleep at his grandparent’s house.  This year we figured we’d let him in on the action.

Mr. FSL & I went Christmas shopping this past Saturday.  We stopped at good ole Tar-Jay for some wrapping paper , tape, boxes, etc… He grabbed a coffee at the in-house Starbucks.  I stalked the dollar section and found ugly dog sweaters.  If Rock is going to be at the party, he might as well represent.

Sunday morning I wanted to try it on my little pork chop of a Maltese.  He was clearly ecstatic about the sweater selection. 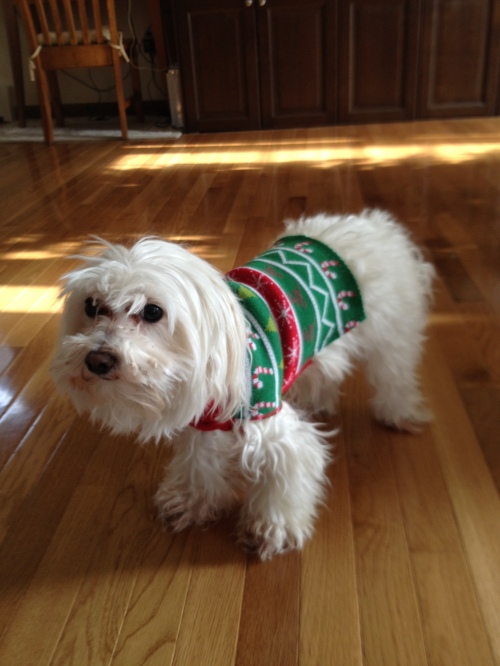 I remembered having a few Christmas things for him stashed away in a closet.

Here are his Christmas Eve PJs. Okay, maybe he need to switch to lo-cal puppy chow these days, but who doesn’t add a little fluff around the holidays?! 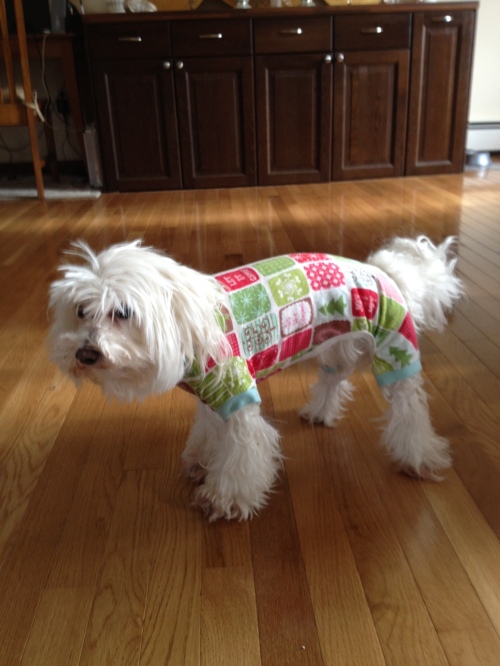 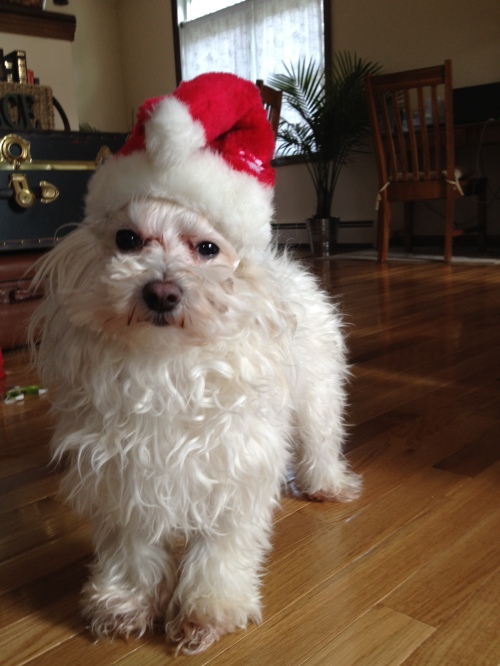 And my personal favorite, the naughty elf. 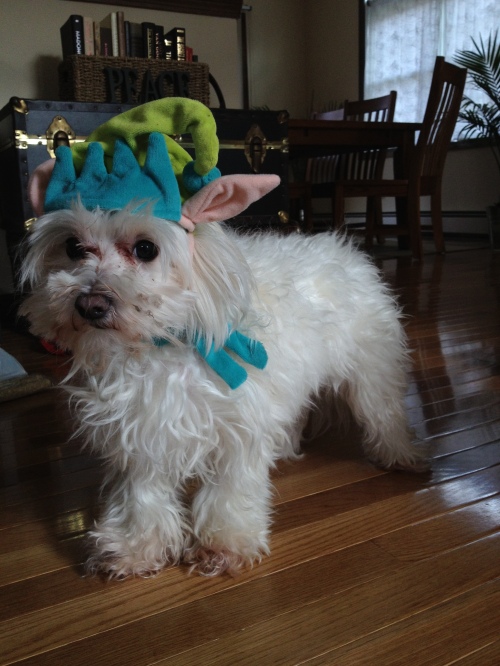 Big mistake giving him a rawhide toy before our little photo shoot.  He gnaws until it’s gooey.  His mustache is a disaster.  Our apologies for Rock not being photo ready.

I’m having a tough decision.  What should he wear to the 2011 FSL Ugly Sweater Party?

Pie Hangover. Somebody Check Me In To The Betty Crocker Clininc! 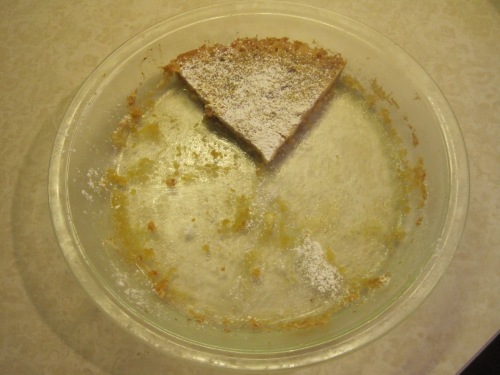 I woke up yesterday morning and ate a slice before work. I had a nibble (or two) (okay fine, five). I was slicing off these ridiculous slivers of pie like, a quarter of an inch thin in a pathetic attempt to justify having more. “If I just have this super-duper itty bitty teeny tiny taste, it’s not thaaaaat bad”.

I had to get as far away from our refrigerator as possible, so I went outside to the garden-in-training. I dumped a whole bag of Miracle Grow topsoil to give these poor seedlings a shot in hell. I watered the garden bed, and I even made little laminated labels so I knew what was what –if anything should sprout one day 😉 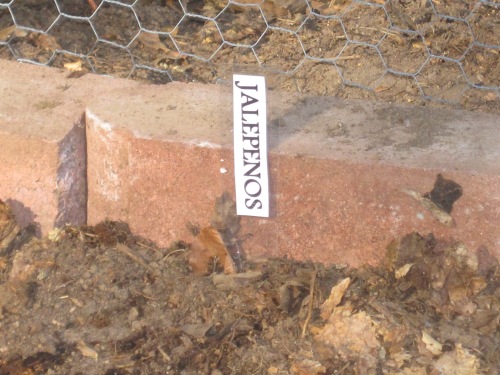 Our flowers around the yard are finally blooming!! 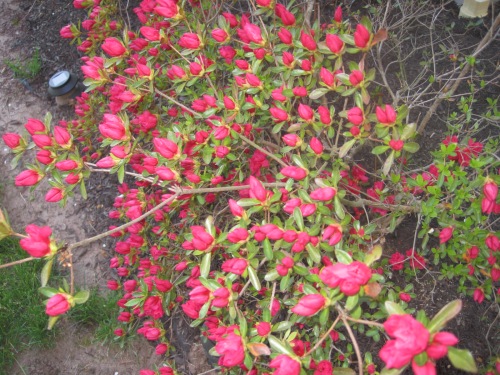 Once there was nothing left for me to do with my wanna-be green thumb, my thoughts strayed to the pie *cue Jaws theme**

So I decided to go for a spin on our new(ish) Blaster ATV with my groom.  I had way too much fun riding that thing, oh our poor neighbors! I felt like a seven-year old again. Not to mention that we totally looked like this scene from Dumb & Dumber:

I was feeling the itch to have another slice when I decided that I should distract myself and give Rocco a bath.  He was not happy about it. 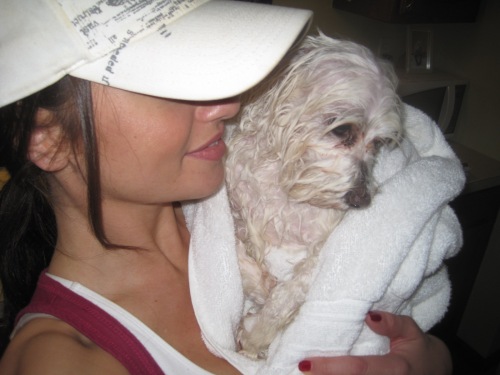 He went totally bonkers when he got out!  He ran around the house for like 5 straight minutes like a mad dog as fast as he could!   He must have been feeling tough after getting sent to the evil bathtub and coming out with more Jerry Curls than Rick James.  He’s so brave, my boy! 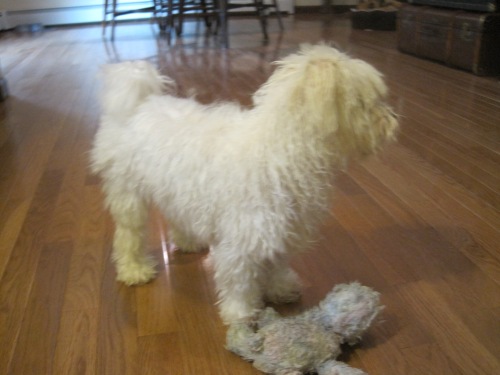 I cracked open a Light Mike’s Hard Lemonade while I whipped up dinner, cuz I’m classy like that 😉 What?! Alcohol curbed my craving. 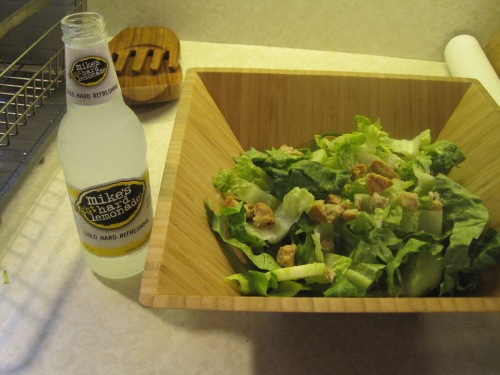 If you decide to make this pie (get the evil recipe here), do yourself the favor, and have lots of people around. You’ll only be able to get one slice, because it will be gone, or you won’t eat the whole damn thing (like, ahem, me) out of sheer humiliation. Bake at your own risk.

Over the past 4 days, I realized just how lazy Rocco really is.  He is the champion sleeper!  I’ve heard the phrase lazy dog, but my little furry friend embodies it.

Here he was Thursday morning: 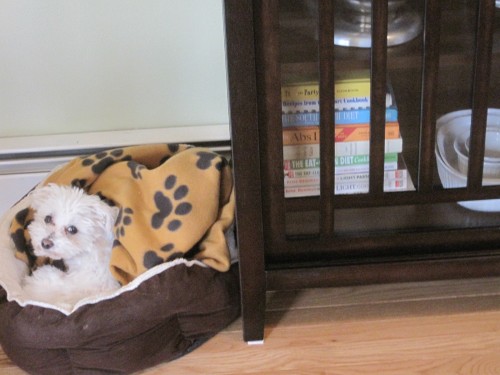 And here he is Friday 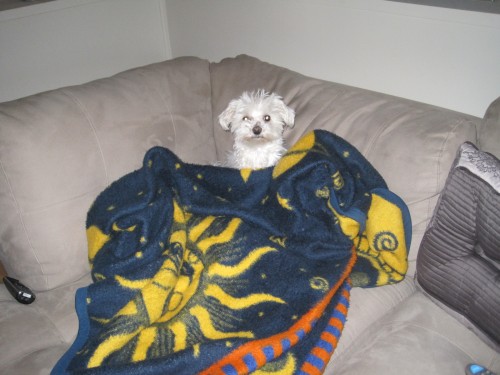 And yesterday.  Did he even frikkin move?! 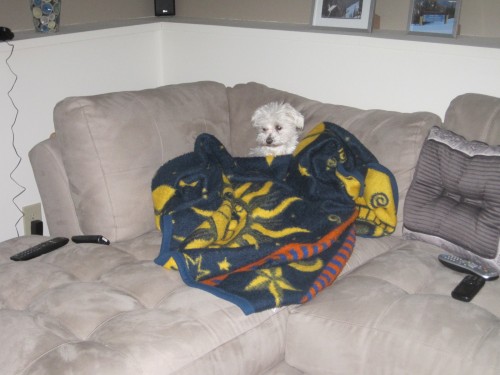 He is a master of couch surfing.

I did exactly the same thing as he did all week. I feel somewhat better, but I am realizing, I should have probably stayed home 1 more day.  I am exhausted and it’s 8 AM.

Enough of the whining.  There is always a Silver Lining (pun intended ;)).  I watched Sex And The City reruns (they never get old to me!!), about 8 TiVo’ed episodes of No Reservations, and a little march madness.   I can’t talk too much smack.  I took a really hot bubble bath last night and it eased the discomfort of my aches, I drank an obscene amount of tea, and slept like it was my job.

What did you do this weekend? 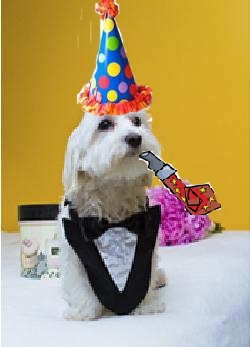 Today is my dog Rocco’s 5th birthday!  Tonight’s doggie party will consist of my mom, my mother-in-law, my husband, myself, & Rocco  eating snacks & watching the Bachelor Finale!

Rocco loves Emily.  He has a thing for blondes.

Do you have a pet?  Post a pic in the comment section & let your furry friend have it’s 15 minutes of fame 😉  We’ll have a virtual Pet Par-tay!

I was over at Simply Shaka  and noticed she is doing a challenge.  It sounded like a good idea.  I’ve been getting all sorts of emails asking some of these questions. 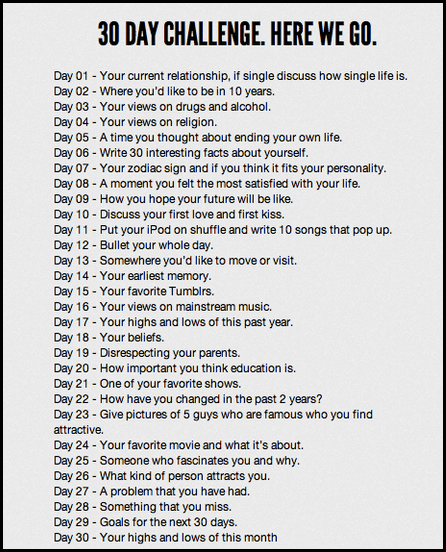 My current relationship.   Well this post may be a bit redundant.  Anthony and I dated for 3 years before we got engaged (that story can be read here ) 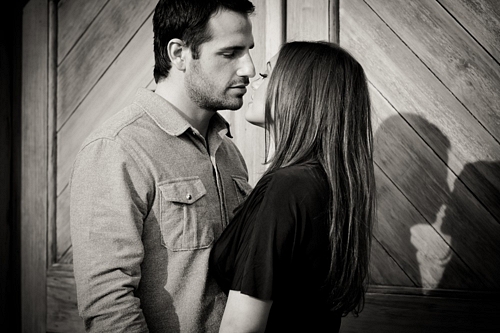 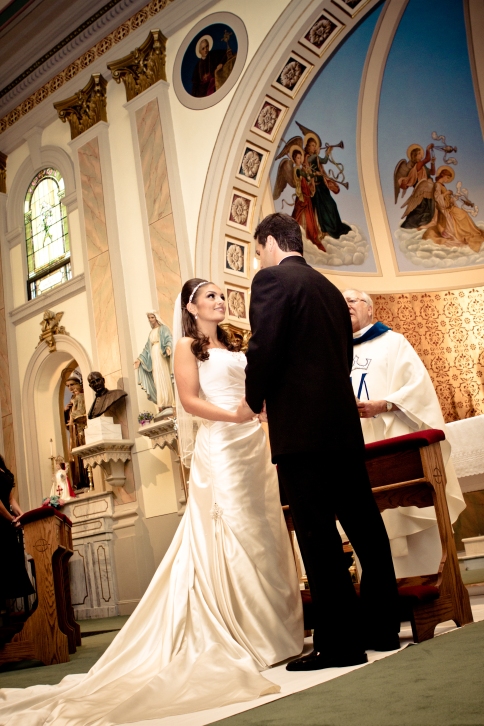 We joke around with each other, we go to the gym together, we watch the Jersey Shore together and we eat dinner together every night.  We are pretty much best homies.   We have grown as a team and I’ve realized how good we are under stressful situations (like our latest house drama). That makes me very optimistic about the spirit of our future. We also work in the same job field, so we can laugh, understand, and at times commiserate. 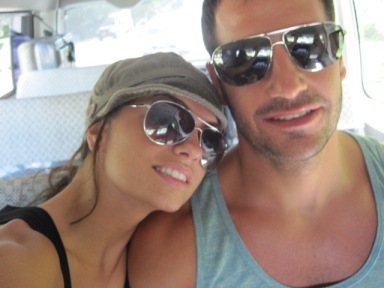 That’s not to say that we both have our own friends.  He goes skiing with his buddies, I go for manicures and lunch with my girls. I got really lucky because his firends’ wives are all incredible people too. I consider them my friends now.

Our relationship is very much 50 50 give & take. We both have very similar big Italian families and our family is our #1 priority. I guess you can say that we have the same values.

Plus he adopted Wee Dog as his own 🙂 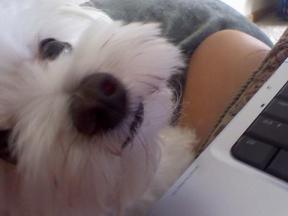 What is your current relationship like? If you’re single, what are you loving or hating about it? Gimme the scoop!

Posted in Inspire me!, Uncategorized

Ode to my dog

I know this sounds strange if you are not a pet owner, but some days I want to quit my job, do yoga, and hang out with Rocco.

I love walking through the front door to this:

I am completely content with blogging, sipping chocolate glazed donut flavored coffee, with Wee Dog on my lap snoring (he snores out loud, and I love it).

Norah Jones is content with just her pup. She gets me. Listen to the words of this song. Loves it!!

Posted in Flava In Your Ear

Okay. I know what you are all thinking. Weird! Well in case you did not know this, my dog Rocco is a Maltese. This breed of dog does not have fur. They have hair that just keeps growing and growing (even between his toes). Their hair is very very fine and knots and mats easily (he started to get dreadlocks–not kidding mon). I have been meaning to get him groomed, but the $50 never appeared in my purse and I procrastinated on calling Poochies Parlor (Rocco’s hair stylist :P).

Since Rock sleeps in bed with us, I was falling asleep and petting him. I felt his nappy dreads, and I felt like a horrible dog mommy. It was eleven o’clock. I sprung out of bed in my night-shirt and underoos, grabbed the pup and a pair of scissors and headed into the bathroom. Poor Wee Dog entered the bathroom like this 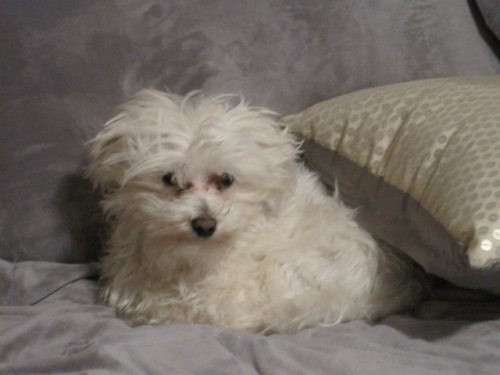 After I had an Edward Scissor Hands moment, we emerged from the bathroom about 25 minutes later. He was freshly cut, and I could finally sleep! 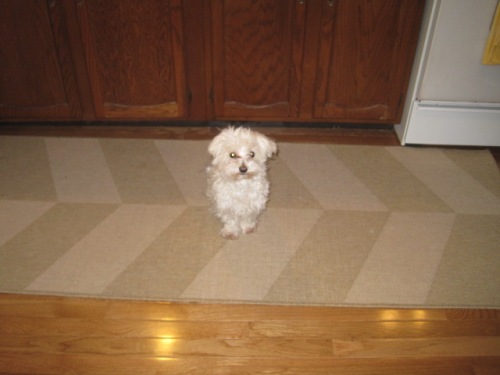 Sweet Relief! Kind of a hack job, but hey, what do you expect when you cut your dog’s hair with one eye open?! 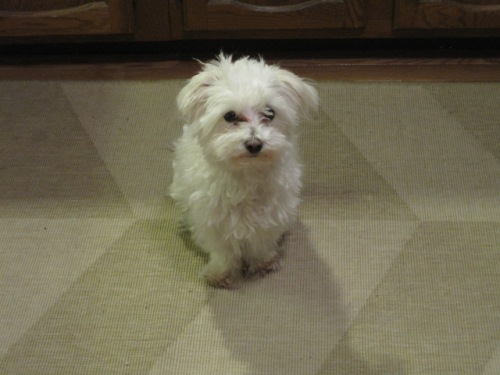 I was getting ready for work today, I popped back into my room to find this 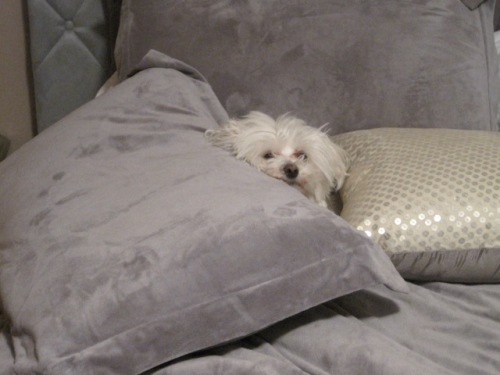 He has serious bed head. I thought it was worth sharing. HeeHee

He’s sooo not a morning person.